In 2010 the Company’s name was change to Condor Metals and a new board of directors was assembled.

In 2009 Mr Ross Brown and Mr Luis Aguilar set up a Peru-based company for the purposes of acquiring gold and copper projects in Peru. Mr Laurie Ziatas joined the fledgling enterprise in 2010 and on behalf of the enterprise established and badged a public unlisted company called Inca Minerals Limited (identified by ACN 146 669 687).

As a result of increased seed funding, the Company was able to complete its acquisition of projects in 2011. The projects include those currently comprising the Company’s outstanding Peruvian portfolio, Chanape and Moquegua. 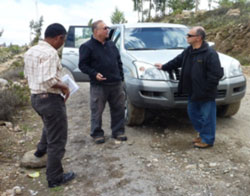 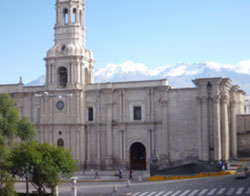 Left: Mr Chavez, Mr Aguilar and Mr Ziatas discussing the Moquegua Project which is located near the stunning town of Arequipa • Right: The 16 Century Arequipa Cathedral and the high peaks of El Misti in the background

In March 2012 unlisted Inca Minerals merged with listed Condor Metals. The transaction; led and ably negotiated and consummated by Mr Ziatas and Element Capital, was a script deal on the basis of one Inca share for 2.3 Condor shares. Thanks to the strong message from its board, the overwhelming majority of Inca shareholders approved the transaction.

Between March and June 2012, Condor Metals underwent several important changes. There was a major change to the board;  the Company name was changed to Inca Minerals (May 2012); and, the Company’s ASX code was changed from CNK to ICG (June 2012), Dr. Justin Walawski joined the board followed by Mr. Gareth Lloyd in the same year.

From 2012 to the present the Company’s board is un-changed. Mr. Brown (Managing Director), Dr. Walawski (Exec. Director) and Mr. Lloyd (NED) have provided the Company steady and stable guidance during an uncertain time of dwindling global exploration and poor commodity prices. Yet despite this backdrop, the Company put money in the ground and discovered a large mineralised porphyry system at its Chanape Project.

Despite discovering a large porphyry system at Chanape, it is seen as a “technical discovery”. Certainly a validation of the Company’s exploration process – the Company is focussed on making economic discoveries. We drilled the right number of holes at Chanape, not one too many, not one too few. We move on.

The Company has changed direction. From low-grade porphyry style mineralisation, the Company is now focused on high grade zinc mineralisation. Inca has two exciting zinc (plus silver, plus lead) projects in Peru, the Riqueza Project and the Cerro Rayas Project.

“Both are exceptional projects” says Mr. Brown. “High grade Zn mineralisation that you can walk on. At Riqueza there’s a dozen known high grade veins, mantos, breccias, a 600m long gossan. At Cerro Rayas, there’s a vein system over a kilometre long with three mine workings scattered along it. We can’t wait to start drilling these walk-up targets”.

The Board wishes to acknowledge the tremendous efforts of all the people that have played a part in shaping Inca Minerals.

The founding directors of Inca Minerals (now called Urcaguary) and those involved in the start-up of the business, Mr. Ziatas, (co-founding director and former Chairman), Mr. Brown (co-founding director and current General Manager), Mr. Aguilar (Puna and former in-country Regional Manager of Inca), Mr. Ponce (Puna and in-country legal adviser), Mr. Oscar Rea (in-country geologist), the Condor board and management, Element Capital and DJ Carmichaels (as past and present corporate advisers) and all past and present Inca shareholders.