This exciting new Lorna May Project (Lorna May) is located 325km east of Alice Springs in the Northern Territory and is within the Atnetye Aboriginal Land Trust. Lorna May is a Greenfields project and is considered highly prospective to host Olympic Dam style IOCG mineralisation located within the underexplored Arunta Block of the Northern Territory. This Project (tenement number EL 32107) is a joint venture between Inca Minerals (95%) and MRG (5%), which first identified the potential of the Project area.

The single tenement that makes up the project, EL 32107, is still under application. The company will inform the market as soon as the tenement is granted.

Lorna May was identified by MRG during interpretation of Geoscience Australia’s AusAEM survey results, with a major conductive anomaly identified. The anomaly measures in excess of 5km, extends to depth, and appears to occur beneath approximately 100m of cover. The conductivity response displayed indicates that this feature intruded into and disrupted the overlying lithology, likely in a rather violent manner, typical of IOCG brecciation events.

Through interrogation of several geophysical datasets, it is evident that main target at Lorna May is a discrete occurrence of coincident magnetic, gravity, and conductive anomalism. The size and inferred geometry of this feature suggest it is an untested exploration target of true Tier 1 potential.

The Project represents a tremendous opportunity as an early mover in an under explored region of Australia. The Company certainly looks forward to activating this project when it is granted. We anticipate granting in 2021. 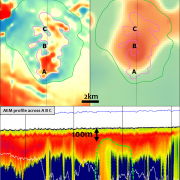 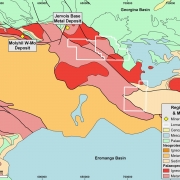